Dear Lord, I wish this blog goes viral..so viral that it surpasses all the hate blogs, twits and fb posts that I have read this day concerning this great woman. I love her. I admire her totally. Yeah, we are not perfect but I know she is genuine and that someone somewhere got it all wrong about what she was saying. I believe that someone had to say something about what’s happening..too bad someone got the message all wrong..Please keep reading. Maybe you’ll think before you make your judgement about her or anyone else for that matter!

Number one. The issue about calling easlando guyz poor and lazy. Let me begin by saying that a dog never backs at a car that is parked in a garage. Well, I don’t know if this saying is applicable here but hey. Kindly tell me after you read the paragraph, sawa ;)? Are you an eastlando chap, who wakes up at 12, shacks up at your girlfriend’s place, waiting for her to come in the evening with food while you sit all day like a coach potato watching TV and complaining about the government and what it hasn’t done for you?Then, that was you that she was describing. And indeed there is some truth in that. You see, the hardest thing for people to accept especially African men and women is the truth. It hurts, it stretches you out of your comfort zone. Frankly, the sight of idle men in the estates is frightening and discouraging. Men are supposed to be the providers, the leaders,vision bearers, people who take initiative. People start from somewhere my friend. If you take this positively, no matter how fake or true it is, you’ll see that it was meant for your good. Wake up instead of attacking and criticizing people. Wake up from that nonsense of playing chiles in the estate and competing over who knows the latest series.  Seriously? And you want to be called a man with beards, yet behaving like some three year old boy? You have been in that blame game for a long time Mr. Man, waiting for people to come and sympathize with you and tell you woooiiii for the poor pathetic state that you are in. Grow up and face life! Everyone who is successful goes to the loo like you go, they were born by a woman someone and some even survived pathetic situations than you. So you have no excuse, you have no complaints!

So what if she said that guyz are poor?(which I know she didn’t)..Are you poor?Do you know the meaning of being poor?Do you manage to get food everyday and have shelter and some few clothes that you can brag about to your friends?The Bible says that as a man thinks in his heart so is he..If you think that you are poor suit yourself..May that message offend you and provoke you to either think better of yourself or think the worst..The choice is yours of whether you want to change your life or not.

Number two. The issue about women moving out of east lands to a servants quarter in Runda. Let me begin by saying this, that you will always become what you keep seeing and associating with. The whole idea about this statement is not about materialize and despising others. It’s about having a paradigm shift, if you get what am saying.(hope I haven’t lost you). It’s about seeing a different life than what you are used to seeing. When you see a higher dimension of life, you’ll act different, your mind will change, your speech will change and this in turn will affect your destiny. And so what if the chick gets hooked up to a rich guy, whats the beef there?As long as the man has vision and knows what he wants in life and fears God, there is absolutely nothing wrong with that. If you want to marry or get married to a different kind of person suit yourself. God says that according as your eyes have seen ooo, so shall He give to you..And don’t complain later when you see your neighbor blessed with what you criticized. You just cant handle that, can you? About the tithe thing. All tithes belong to God, in case you are a christian and you are wondering what the hell tithes are or confusing it with the mbegu thing. Tithe is not 310, never was and never will be. That’s a tenth of what you earn and it should go to God as a way of acknowledging that He is the source of your blessings and that you want Him to continue blessing your life. Offerings are given willingly. God will never force you to give it, regardless of what a preacher says. He is a gentleman. But when you don’t give(by the way, it is not give but pay like the way you pay someone’s deni, yeeeesss now you get it. In fact God calls anyone who doesn’t pay it, a thief. Of course, these terms only apply to any person claiming to be a child of God and singing all the hymns in church with the hope of going to heaven in the sweet by and by. When you tithe, God opens greater door for you, of course if you do it in faith that things will happen, they really do. Try it before you criticize what you don’t know about. God has an obligation of rebuking the devourer each time you tithe and the windows of heaven are open over your life. If you pay it believing that is. But if you pay it complaining and saying that pastors and priests are eating your money, you will never benefit from the rewards of giving. (I’m talking from experience). And on that note, let me prepare mine, Oops I forgot to pay it last Sunday!!! 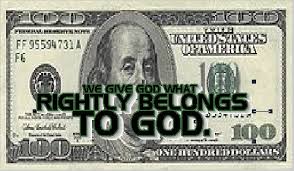 Before you throw a stone, examine your life, find out the truth about the information. I know someone out there just wants to make a name for their blog or get more traffic which is not fair and I know as surely as God lives, that person will pay because God is watching..Don’t be caught up in that stupid drama if you were not in that service or even heard her saying what is being purported by social media. Or else……(fill in the blank space)..Laterz!!!

4 thoughts on “In defense of Pastor Kathy”