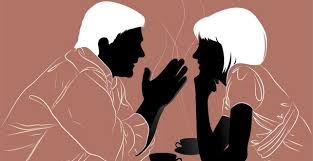 My friend, lets call him Mariano, (coz I have no guy who is my pal with a name like that and am so into soap opera and stuff, so the name settles) requested me to meet him urgently. From his tone during the phone conversation, he sounded troubled. He sounded as if he had something really pressing that he wanted to tell me. I gave the office a fake excuse  for leaving early, ” a family emergency”, I said, and as quick as road runner, the cartoon, yeah you guessed right, I rushed to meet him in the designated place: our usual hotel joint.

I arrived late as usual and the first thing I noticed is that the hotel had changed. It was not the way I had left it, like some three years ago when I stopped coming to have my favorite meal: Fish and kuon bel (brown ugali) like they say it in French. The color had changed from some flashy white color to electric yellow. I guess the new management is Kao or something. It looked bright though and I found new chairs and fans and for once some cool jazz music to entertain us as we eat our food.  I found Mariano seated on a verandah, holding a book, waiting for Miss late comer to arrive. I had never been early  and he knew that. I think he is the only man who knows me for real. We are so tight that sometimes he finishes my sentences especially when trying to explain something to someone. He stood up when he saw me and stretched out his arms to hug me.I stretched mine too and surprisingly he gave me a light kiss which he has never done. Because I have never allowed it.  And he knew it. He knew how my face turned red whenever a man shamelessly did that without my consent. What was he trying to do,  make my bile rise or what? Anyway, for the sake of urgency, I ignored it and smiled as he pulled the chair for me to sit.

“How have you been? Its been long?” He asked, calling a waitress by our table to request for a meal. “By the way, what would you like to eat? Your usual? Its on me.”

“The usual,” I replied ” “only that this time make sure they include black pepper in the soup.”

“Since when did you start including black pepper in your food.’ He asked with a shocked look on his face.

“Just since.” I replied trying to evade the question.

” So, why did you call me so urgently?””Is it something serious?” I asked concerned, trying to check whether his face had some clue, something to tell me why he wanted to meet me. After all we had parted ways after he told me that we could no longer be friends. that he had found the love of his life and that it was best for us to break the whole thing.

” Harry, do you know that men have secret loves?” he asked

I was surprised. I didn’t know whether the question was rhetoric or whether he wanted me to give a definite answer to the question.

” Really?” I replied, a million and one questions racing in my mind as I tried to ponder where that question was going. I knew, from my psychology class, that men never speak in straight lines. They hint a lot. They see how they”ll score when they throw in one word , or two at most.

“Yes, I have a confession to make.”I have always loved you.” he said.

Food almost chocked me when I heard those words. I was as shocked as a tipped cow.

” Then why did you marry her?Why didn’t you say this when we had everything going on?”

” I’d rather have you as my friend than my lover because lovers have fights and they break up and I cant afford to loose you. I want you to stay with me forever.” he replied, looking straight at my face.

I never understood the relevance of this statement until I joined another statement that another boy pal of mine told me. That men never marry their true loves. They always marry someone who is less and their heart is always somewhere else.

“Wont you say something?” He asked, trying to take my mind off cloud nine where it had slowly began building empires and not castles of questions. “Why would you do that? Why would you subject the rest of your God given life to live with someone you have no iota of interest in? Why would you want to torture yourself like that? Doesn’t life have many more things that are super frustrating like an annoying boss, a nagging mother in law, a stupid exam that you are supposed to cram and you have no idea what the teacher was talking about….such stuff..After dealing with such madness, I need someone I can lean on, not someone I endure because I was afraid to say something or afraid of taking a risk in love and see how it goes. ”

” Its not that bad Harry,” Mariano retorted,” men are wired differently, we can bear it, just spend the rest of our lives buried in work, make sure that wify and kiddo are alright and life goes on. Yeah, life always goes on. And I will always have haunting dreams at night of what it could have been if I just took the step of saying this words to you, oh what joy it could have brought me to have you in my arms. But for now, this is what’s best for us. I cant bear loosing you. I’d rather this than not have you at all. ”

The shock that I had could not keep me seated for long, so I ordered the waitress to pack the food for me. It was cold already, and I had already lost my appetite. I wanted to sit and ponder, try to understand why exactly men do this. Is it the curse of cupid or is it something that we bring upon ourselves? Mariano desired to offer me a lift home, but I declined as I wanted to continue meditating on this horrifying phenomena. That you can have a man’s ring, but not have his heart. Is this really true?