Yesterday I received a heart breaking phone call. It was my best pal, Imani (not her real name), who sadly informed me of the demise of her father. I quickly left all I was doing at work and headed to meet and console her. She narrated her times with her father, that despite the fact that he never showed emotions, he was a great man. However, there is one thing that she regrets. He never had photos. I also had the same issue with my grandpa. He passed away with minimal photos. Looking for them was like being given the task of finding a needle in a stack of hay!

The selfie has become a huge part of modern life.Well, at least for me who is addicted to photos.  It has transformed the simple self-portrait into something more immediate and has grown in cultural importance – it’s been linked to identity, self-exploration and narcissism. A selfie is as simple as  putting a camera on the front of a mobile device and capturing the moment. Whether it is real or fake, only you, God and the angels know..

Selfies are everywhere. In 2013, selfie was named the word of the year by the Oxford Dictionary and in the year 2014 a  song was released called #selfie. Additionally, one could also argue that the world would be seeing a lot less of Kim Kardashian and her clan if the selfie had never been invented.

Recent figures show that 91% of teens have taken a selfie and over 1 million selfies are being taken each day. 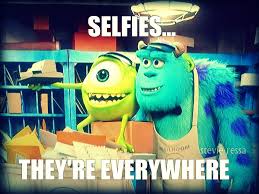 A study conducted by psychologists found three special traits attached to selfie addicts which are  known as the “Dark Triad”. These traits are dark as they posses a seemingly evil connotation that is linked with a callous and manipulative way of interacting with other earthlings.

The journal dubbed,” The Dark Triad and trait self-objectification as predictors of men’s use and self-presentation behaviors on social networking site,” revealed the following traits:

Narcissism: Extreme self-centeredness and a grandiose view of oneself. The journal believes that narcissists have an excessive need to be admired by others and have a sense of entitlement. People’s growing obsession with posting the perfect selfie is evident in the existence of apps designed to allow the user to touch up and perfect their image before posting online.

They’re likely to agree with statements like: “I’m more capable than most people,” and “I will usually show off if I get the chance.”

Psychopathy: These are people who are impulsive  and lack empathy. They are more likely to employ words like : “Payback needs to be quick and nasty.”

Machiavellianism: Manipulative-ness without regard for others’ needs. Those high on this trait tend to have little concern about morals. They pose nude photos.

I’ve heard so many people say stuff about selfie addicts. Mostly its on the negative. Other times, these self righteous, social media experts will label a person who is addicted to this habit as an attention seeker, a person who has nothing to do other than brag to the world of the places they have visited. Other times, they have been called wannabes, and those with the introverted nature have been exalted as being experts.

And with all the negative reports on selfies, today, am here to advocate for a selfie revolution. I’m here to provoke you to defy all the self righteous hawks on social media whose work is just to criticize those who are on the wrong as if they have the manual to teach us on  conduct of social media. I’m here to tell give you the courage to share your moments with the world and show you why you need a selfie for every place you visit; every moment need to be captured. This is because one day you are going to the grave and down there is all silent, at least leave us something to remember  you with. Let us relieve the moments of your short time on this place that’s not our home and feel you near us. And just as  Beyonce’s song, let it be known that you were once here, a passer by, a sojourner to an unknown world.